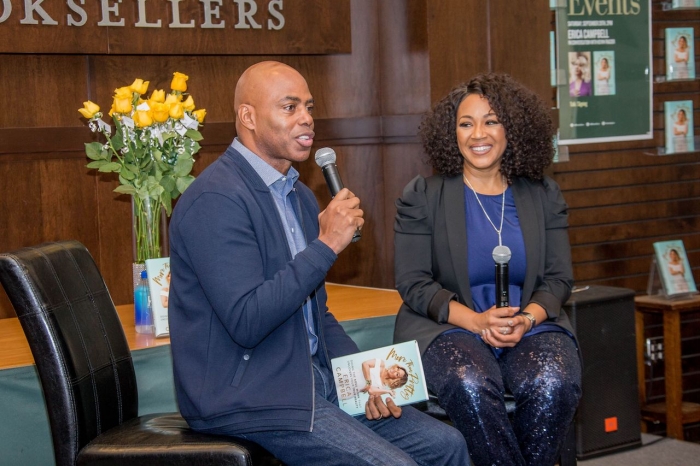 Conquering low self-esteem, depression and unhealthy habits are some of the issues that Erica Campbell tackles in her new book, “More Than Pretty: Doing the Soul Work that Uncovers Your True Beauty.”

Recognizing that many women get hung up on physical attractiveness, Campbell offers pages of inspirational guidance and practical advice to help females of all shapes and sizes realize that external appearance doesn’t define self-worth.

“I know that when God created me; He didn’t say, ‘I sure hope people like her.’ Everything that is amazing inside of me was inside of me when I was born. It is my job to nurture that and look into the mirror and say what God says about me,” said Campbell during a book signing on Sept. 28, at The Grove’s Barnes and Noble.

She also presented autographed copies of her book to Kacey Hall and Diane Quaker, winners of the Taste of Soul contest. Campbell and her husband, Warryn, will headline the Brenda Marsh-Mitchell Gospel Stage at Taste of Soul Family Festival on Saturday, Oct. 19, on Crenshaw Blvd., in Los Angeles.

It’s surprising to consider that Campbell – a Grammy award-winning singer, television star and radio host – would have issues with self-esteem, but during the conversation with celebrity host, Kevin Frazier, she revealed that being “pretty” has its shortcomings.

Growing up in a large family, Campbell was frequently called “pretty” and she appreciated it, even as the word followed her as a teen and young adult.  However, in her singing career as one-half of the famous gospel duo, Mary Mary, and other professional endeavors began to take off, it seemed as if people used the word as a dismissal of her intelligence. 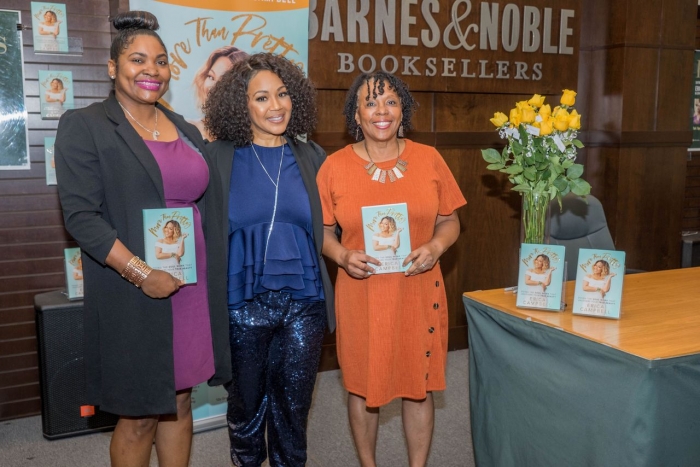 “As a businesswoman, when they say ‘you are so pretty,’ I wonder what is the point of saying that? Let’s negotiate. I had to realize that I didn’t need that word to validate me. What I thought of me became the most important thing and I knew what God has placed inside of me is special,” she recalled.

In “More Than Pretty,” Campbell discusses some of her personal struggles in the gospel music industry and overcoming her insecurities in a field that focuses on outward appearances.  She also shares insight on applying on God’s word and His affirmations to build patience, confidence and excel in achieving His will for your life.

Explaining that how a person examines their progress in life can affect them, Campbell told the audience at the book signing that she figured that she would be a success much earlier since she had been from the age of five and she is now 47-years-old.

“I thought I would be a star much sooner and maybe a teen star. But I didn’t get my record deal until much later, and so your journey is your journey and how you look at it is very crucial,” she said. “You have to learn to appreciate things and realize that they can be a launching pad for things to come later in life. The scripture says there is nothing wasted in the Kingdom, not even your brokenness or shame or disappointments. All of that stuff is usable if you let it be.”

Also, Campbell assured the crowd that she not only practices the advice outlined in “More Than Pretty” in her profession, but also as a wife, mother and first lady at California Worship Center in North Hollywood where her husband serves as pastor.

“I appreciate the support that I received from my family, church members, friends and my fans,” said Campbell. “I wrote this book because I believed it was for somebody and something that would be healing for people.”

“More Than Pretty” is available at Eso Won Books and on all digital platforms.